Little Bothy at Lyme Cottage
The History
Lyme Cottage sits on the main route from Tenbury Wells to Ludlow on the Shropshire side of the River Teme. Despite its proximity to the road, its history and its surrounding fields provide and air of peace and relaxation.
The cottage, together with those either side of it was commissioned by Lord Northwick of Burford in 1867 to provide a home for a District Nurse in the village. Its joining cottage was the original Police House, including two cells in the garden and to the right, is the Old Forge.  They were among the first houses in the village to be built with ‘indoor’ bathrooms, (not plumbed of course) as well as a solid brick pigsty in the garden. Both remain in situ, the bathroom now being well and truly plumbed in and the sty now housing garden tools rather than a pig.
Nestling alongside Lyme Cottage is Little Bothy, as far as we are aware, part of the original construction of buildings on the site in 1867.   The intended use of the Little Bothy is unclear, however given that the cottage was built for a District Nurse who may well have been the only one for many miles. The current owner speculates that the Bothy may have been a place to ‘treat’ patients from other villages or travellers on their journeys. 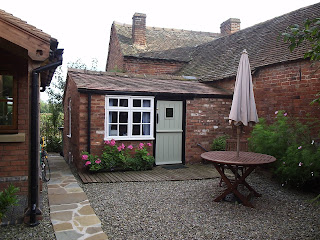 Lyme Cottage and the Little Bothy were both sympathetically restored during the early years of 21st century by their previous owner. Many of the original cottage features remain including the fantastic internal oak doors and tiled floors. A modern two-storey addition to Lyme Cottage successfully increased its living space, adding a pretty little garden room with stunning views through the arbour to the fields beyond. The Little Bothy, which had been rather neglected over the years, was developed into an en-suite guest bedroom.
During the summer of 2011 Little Bothy will undergo further change, with the addition of a fabulous oak conservatory to transform it into a self-contained holiday cottage for two.
The addition will make space for an open plan kitchen, dining and sitting room. Its partial glass roof and plentiful windows will provide a feeling of ‘living in the garden itself’. Whilst its tubby little wood burning stove will ensure cosy living even on the coolest of days.
Furnished in a mix of old and new, with luxurious linens and a well-equipped kitchen the Little Bothy will be haven in which the historic peace and tranquillity of Lyme Cottage, its garden and small orchard can be enjoyed. 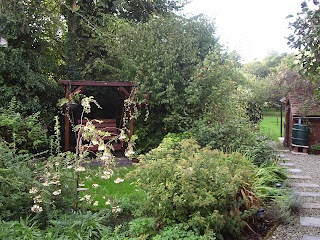 One the borders of Shropshire, Herefordshire and Worcestershire, Little Bothy provides and excellent base for exploring all three counties.
Sitting in the old part of Burford village, Little Bothy is within walking distance of Burford House Gardens, with its organic restaurant, garden centre, interiors shop and historic gardens as well as Burford St Mary Church.
Also within walking distance is Tenbury Wells, just half a mile away with its host of individual shops, local food retailers and a plethora of eating-places.  As well as riverside walks and a very good swimming pool (should you over indulge on the local foods).
For more history, antiques, shopping and eating, Ludlow and Leominster are both within a15minute drive.
National Trust properties, Croft Castle and Berrington Hall are also within easy reach
All three towns offer a range of festivals throughout the year.
Your stay at Little Bothy will include;
Breakfast pack including locally produced foods
Wood supply for wood burning stove
Own small patio and outdoor eating area
Access to Lyme Cottage gardens
Off road parking for two vehicles a few yards along from the Little Bothy
It should be noted that;
Little Bothy is situated on the side of a road and therefore some background road noise should be expected.
Lyme Cottage continues to be a family home and its gardens occasionally invaded by (usually very well behaved) grandchildren.
When can I come? 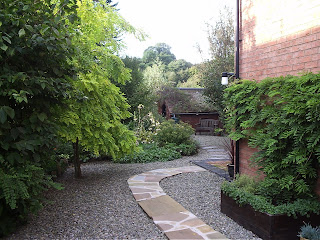 Sadly not yet .......It is hoped that Lyme Cottage will be available for occupation from the end of October 2011. ..... watch this space and read about the developments as they unfold and as you do.... just imagine yourself enjoying a lovely away from it all weekend break in The Little Bothy......
Posted by Lyme Cottage Industries at 00:07

Lyme Cottage Industries
A small rural enterprise that will incorporate my new plans with my existing business, Pretty Penny Creations, the home of Cushionology and Tedology. (web site still www.prettypennycreations.co.uk for now) Hand made cushion collections and teds, all created in my workshop in the orchard. In time I hope it will also incorporate garden produce and who knows what else may come along.